Functional metagenomics constitute a powerful molecular tool which has facilitated the isolation of novel enzymes of biotechnological interest. Novel pesticide biocatalysts identified via functional metagenomics could find use in environmental protection, human health and agriculture. Our group has applied functional metagenomics in environmental samples with heavy pesticide exposure, i.e. on-farm biodepuration systems like biobeds, in order to isolate novel pesticide hydrolyzing enzymes. Our hypothesis is that in such heavily exposed environments microorganisms are expected to evolve new biodegradation capacities which could be exploited via functional metagenomics. Fosmid libraries developed from the matrix of a biobed system resulted in the isolation of novel esterases whose activity against pyrethroids and phenyureas is on-going. In parallel known catabolic enzymes like PdmAB involved in the demethylation of phenylurea herbicides have been isolated through functional metagenomics and their substrate specificity is compared to native PdmAB isolated from soil bacteria. Our hypothesis is that amino acid polymorphisms in the metagenomics-derived PdmAB are associated with a relaxation of the substrate specificity of these enzyme. 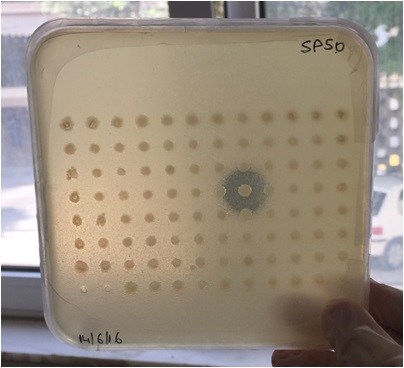